On Sunday Brazil gave Spain a 3-0 beating that was a shock to the soccer world. Not the fact that Brazil won – many thought that was possible. But few predicted that the Brazilians would trounce the defending World Cup champs , Euro championship,28 consecutive wins, no 1 in the world ,etc Spanish team in the manner that they did. And now , of course, the bandwagon jumpers are claiming that Spain is dead and that their style and that of the Spanish club Barcelona that makes up the majority of the Spanish squad has had it also.

The Soccer Yoda says ,”not so fast!”.

Now, to understand the what happened Sunday from a strategy standpoint, we must look at the tactical plan used by Spain and Barcelona ( it is very much the same) and see what Brazil did to defeat it. I will describe it by the basics. If the reader is a very knowledgable soccer person, you might find this part boring (that’s assuming you don’t find the whole blog boring!) If you are a fan, the forthcoming explanantion could be enlightening. If you aren’t a soccer person at all, you will learn much……but I am not sure what you are doing here in the first place! (Don’t leave though!)

One of the main concepts of modern soccer that most coaches accept (not all, mind you) is that in order to win a team must keep possession of the ball for at least a portion of the game. Just kicking and shooting isn’t enough; passing the ball around while looking for and creating openings is needed. In order to do that there must be more offensive players around the ball than  defenders. Rule 1 of possession soccer : outnumber the opposition around the ball! To do that a team must (at least to an extent) forget the concept of spreading out and playing position. Players must move into positions that give the ballholder options to pass without interception. At least one player must be open, so there has to be more offensive than defensive players in the vicinity. 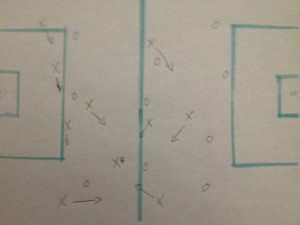 team x attacks to the right in a typical situation, note players moving to teammate with the ball

A few years ago Barcelona started taking that concept to the extreme. They moved their midfielders around so much that it became a moot point as to what position they played other than “midfield”. Their forwards moved back to help in the “outnumbering”, so much so that some observers said they had no “real” forwards at all. The center forward ( who often wears #9-that’s a soccer history thing) moved back so much that the formation was called the”false 9″. And yes, defenders joined in also. It is VERY common for Barcelona backs to go down the wing when the opportunity presents itself. The supporting players get so close to the person with the ball that often the passes are very short ( 2-3 yards) and one might wonder why they passed it at all. Commentators called these super short passes “ticky” passes and the next super short pass was a “tacka”pass and lo and behold, the style got a name! Ticky-tacka became the signature style of Barcelona and since the Spanish national team consists mostly of Barca players, it became their style also.

What happened on the field was that teams employing traditional “spread-out” formations could never get the ball. They couldn’t intercept the passes because not only were they outnumbered , but the Barca/Spain players had incredible ball control, passing accuracy and the vision to spot the open player ( and there always was one). They got physically and mentally tired of chasing the ball all game trying to avoid being “it” in the game of keep-away being played against them. The Barcelona offense would move down the field, often at a very slow pace….I mean a VERY slow pace! At a Barcelona match that I saw at Barcelona’s Camp Nou stadium, they averaged 27 passes per possession; AVERAGED 27 passes! Sometimes it got into the 40 and 50 passes without an opponent touching the ball. When they arrived within striking distance of the goal : they often only had to beat the keeper, a few out-numbered defenders and the offside rule in order to score. The rest of the defending team had been passed by the passing!

In one memorable game Barcelona played Real Madrid in what is referred to in Spain as “El Classico”. Whenever these teams meet it is an “El Classico”. That’s how good Real is. They are always among the world’s best club teams. Barca was just really getting into the ticky-tacka and Real didn’t adjust at all. The result was a humiliating 5-0 defeat and ( as they say) it could have been worse!

The ticky-tacka does have a weakness, of course. All styles ,formations, etc in all sports have strengths and weaknesses. Ticky-tacka’s inherent weakness is the very movement that sets it up. On the rare occasions when the ball IS lost, the team is in a poor position to defend in the spaces that have been left open by the movement. Sometimes they have less backs than they would like; sometimes the entire team is caught upfield as they were passing the ball around. So the counter-attack is their Achilles heel. Any team playing this style effectively must have fast defenders who tackle well and understand the situation when the other team is coming at them. A good goalkeeper doesn’t hurt either. For Barcelona and therefore Spain, that wasn’t a problem, they had the required backs and keeper and next thing you know, they were winning almost every thing. Barcelona was being called the best club team “ever” by more than a few, and the Spanish national team started a winning habit that had few bumps. Opponents did try to adjust ( more about that next post), but largely to no avail. But things have changed in the last few months, cumulating in Spain’s defeat on Sunday. What has happened? What did Brazil do to breakup ticky-tacka?  Next post ( probably tomorrow if the Soccer Yoda can get off the xbox) we will talk about why. How’s that for a teaser?