The new soccer season is off and running and in Europe the transfer window is now closed until January. This means we actually know who the various teams have on their rosters and we can get a inkling of what the new season will bring us in terms of competition for the different league titles and qualification for tournament spots. So, it seems appropriate to run down the more watched leagues from around the world and report our early season reaction to results so far. Today, we examine the English league.

Although there is lots of debate as to which league has the best quality of teams, the most watched set of teams undoubtedly is the Barclay’s Premier League in England. After only 3 matches there are some small surprises and lots stories to follow. At this point, due to a raft of new coaches and players, the league is filled with “ifs” and “maybes”, making it extremely interesting .

Perhaps the biggest surprise is the team on top. Liverpool is the only team in the league to still have a perfect record and although to some fans that fact is not totally unexpected , the manner in which they have accomplished their record certainly is surprising. Last year the Reds scored lots of goals and gave up lots of goals. However, they failed to score against teams with strong defenses who sat back and they often gave up bad goals to those same teams. As a result, they failed to earn wins against weaker teams and this cost them valuable points. This season they have three 1-0 victories against a variety of competition including mighty Manchester United. They have scored just enough to win- one goal in each game. They have scored that one goal in the first half of every game with the same player (Daniel Sturridge) when playing their mini-Barcelona style and have played three strong defensive second halves to earn the victories. Whether they can keep this up is a BIG question. However, in a few weeks Louis Suarez comes back from his suspension for making lunch out of Chelsea’s Branislav Ivanovic last year and IF he combines well with Sturridge , the Reds offense will improve and they will be a genuine contender.

Louis Suarez gets hungry while playing against Chelsea last spring

The teams sitting just below the Liverpool are not very surprising overall. Chelsea, Manchester City, Tottenham, Arsenal…..all are expected to challenge for high positions and there they are already. And , just below them sits Manchester United. 3 of these of these teams have new head coaches and there is a natural adjustment period to new styles and personalities.Chelsea not only has a new coach but they have a roster which consists largely of skilled midfielders, meaning they must change their style. So far that has produced some uninspiring play but the only error to their record is the slumberfest draw against United. (See our last post). Speaking of the Red Devils, we referred to them above as mighty ,maybe we should call them Maybe Mighty Manchester United. Like so many others, they have a new coach in David Moyes. He is considered to have done well with much less talent at Everton but coaching talented players is a different experience and except for a last minute buy of Marouane Fellaini from Moyes old club, he did nothing on the transfer market. Whether United’s talent can win the league again with a new unheralded coach is the big maybe here.

Manchester City has new coach Manuel Pellegrini. He has done good things in Spain, but the EPL is a world of its own. Pellegrini has spent some major funds this summer to bring in new talent. But new coach with new players frequently means time to adopt and City’s loss to newly promoted Cardiff City didn’t inspire any belief in a quick transition. Man City has always been a hard-to-figure up and down squad. They have had good players and mostly solid results the last few years, but every once in a while they have a real stinker of a game. They will be a threat to the rest of the top teams but the many questions to be answered also bring some doubts and many “maybe’s”.

The biggest “maybe”, however, has to be Tottenham Hotspur. They sold one player, Gareth Bale,  to Real Madrid. This record breaking sale gave them enough money to  buy a whole team, so that’s just what they went out and did. Spurs bought 7 …..yes SEVEN ….quality players with the Bale funds. They got enough variety in players to improve all areas of their team if they jell together. Now that is a big IF. Soccer is a funny game when it comes to chemistry, both on and off the field. Often players don’t connect well if they don’t play complementary roles on the field and it’s not that uncommon for various off-the-field activities ranging from politics to women to effect on-the-field performance. So , putting together that many new faces will be tricky for Andre Villa-Boas, the Tottenham coach. So far, they haven’t shown anything special on the field with two close wins over theoretically weaker teams and a loss to Arsenal. But it’s a long season and Tottenham will certainly be interesting to watch. 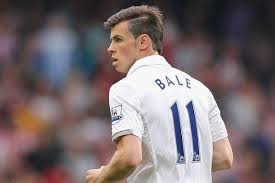 That brings us to Arsenal. Arsenal does not have a new coach. And except for one quality transfer (more about that in a bit) they don’t have a new team. Last year they finished fourth which is a prime position because it is the lowest spot which guarantees participation in the European Champions League. Playing the Champions League is a BIG deal. It brings in more money and , perhaps more importantly, it can bring in more good players. Teams that don’t make the Champions League often have problems attracting quality players, it is almost as if a non-ECL team is “minor league”. Arsenal has an incredible record of consistent  high performance under long-term coach Arsene Wenger. Perhaps it was this consistency which led the Gunners to believe that they could get by with little or no activity on the transfer market.  So, after getting wiped by Aston Villa 3-1 in their first game, their fans went nuts on them for their lack of spending for new players.. This inspired more activity than the previous singular never-gonna-happen attempt to get Suarez from Liverpool. On the last day of the transfer window Arsenal bought Mesut Ozil from Real Madrid. Now this guy is for real. He became expendable to Real because 1) Bale will play his position behind Real’s forwards and 2) the sale recoups almost half the funds spent to get Bale. Ozil could make a real difference if Wenger puts him to good use and on the surface that looks promising. Ozil can play Arsenal’s mixed passing and running game and Wenger is a veteran in working with talent. And, after that opening debacle, Arsenal has actually looked pretty good. With the inclusion of Ozil they could be a real threat to the other top squads. 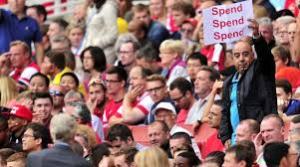 Arsenal fans were not happy with their lack of transfer activity

As far as the rest of the league goes…….right now Stoke City is sitting up there with the big boys. They lost their opener to Liverpool and that was a deserved loss. But since then they have played well under new coach Mark Hughes who is attempting to add style to their traditional bully-boy defense combined with long-ball offense. So they are another interesting team to follow. Aston Villa has Christian Benteke which makes them always a threat if the opposition doesn’t take them seriously (as Arsenal found out). Swansea plays a controlled passing game and they have surprised since being promoted 2 years ago, Everton is a big-team wannabe who ALSO has a new coach in Roberto Martinez ( jeech, so many new coaches!). He too likes the control game but despite having a couple quality players, whether they can adapt is a question. Sunderland has American-on-a-hot-streak Josie Altidore and could surprise. Crystal Palace is newly promoted from the second division, but has brought in several new players and has displayed a feisty manner of play which earned them a nice win against Sunderland and a close loss to top contender Tottenham. They, perhaps, bear watching the most of all the “lower teams”.

So, the Premier League this year has far more stories than ,”can Manchester City catch Manchester United?”. On paper, it has more balance than in recent years and certainly more question marks. That makes for very interesting watching and hopefully very entertaining soccer. We will see!………………………….. Next week- Spain’s La Liga!