Bulletin! We interrupt our regularly scheduled post to bring you this special edition! The United States men’s soccer team has beaten Mexico 2-0 in Columbus ,Ohio to clinch a spot in next summer’s World Cup to be held in Brazil! The win represents the fourth time the USA has played a World Cup qualifier in Columbus and the fourth time the  score finished at 2-0 for the Americans. But the road to this win wasn’t very smooth. Actually, it was quite the opposite. Since we last discussed the USA men’s team (The Will to Win – A Tale of Two Games) things have been a bit rocky. The Americans and their coach Jürgen Klinsman have learned quite a bit about themselves and about what represents the best way to replace missing players with this team. It took a loss to Costa Rica and some hard luck and questionable refereeing to teach those lessons, but in the long run this was a positive outcome for the Yanks.

It actually started in England almost a week before the Costa Rica game when American forward Jozy Altidore strained his hamstring while working out with his club team Sunderland. He missed their Premier league game that weekend and it was feared that he wouldn’t be available for the important matchup between the USA and Costa Rica later that week. The game was being played in Costa Rica where the USA has never won and with Altidore on a scoring spree with his national team, his presence would be sorely missed. Then shortly before the kickoff in San Jose, things got worse – a lot worse. The first game between these two teams in this hexagonal qualifier was played in Denver in a snowstorm. The USA won 1-0 and the Costa Ricans were enraged that the game was played in the first place. So this second matchup between the two was considered by the Ticos as their chance for revenge for the field conditions that night in the cold in Colorado. They got their revenge in an unconventional and unplanned manner. A few hours before the game it rained quite heavily in San Jose and the field took quite a bit of water. There was never a question of not playing the game, but the conditions were not ideal. The grass was wet and the turf loose and just before kickoff, Michael Bradley planted his left foot on the ground while taking a routine kick in warmup and the turf gave way. He twisted his ankle and the injury ruled him out of the contest. By game time Altidore was doing better, but Coach Klinsman decided that he would rather save him for the Mexico game 4 nights later, therefore giving Jozy more time to rest his hamstring. So, now, just before game time, Jürgen found himself down not just one, but two of his most important players.

In a situation like this, a coach has several options. Option 1 is to simply substitute the two “second string” players for two injured starters and leave everybody else as they were. There is another possibility though, especially if the coach feels that there are better players available than the replacements for the missing starters, even if those better players typically play other positions. Klinsman chose the latter option. He moved Landon Donovan from his expected outside midfield spot to a forward position where he could linkup with Clint Dempsey in a two forward system. This wasn’t what Dempsey was familiar with when playing for the USA and required some adjustment by both players. By moving Donovan, the right midfield position which Donovan would have played opened up and Jurgen solved that question by using Graham Zusi. On paper this wasn’t too drastic a solution as Zusi had played decently in prior qualifiers during the spring, but he isn’t Landon Donovan by a long shot. Coach Klinsman covered Bradley’s absence by moving outside defender Geoff Cameron to Bradley’s holding midfielder spot. This position requires a mountain of playmaking and creative passing and Cameron ,while having some experience as a midfielder, has always been a defensive midfielder so he was thrust into an unfamiliar role with only a few minutes to prepare. In Cameron’s place , Michael Orozco Fiscal was used, again with only a few minutes to get ready.  Now, if you are counting, that is five- count’em- five positions that were changed with either new players or roles. So, half the field players starting the game were not the original players on the original starting team in their original starting positions.

The Costa Ricans were VERY fired up for this big contest, in front of their home fans, with first place in the hex at stake. They pressured the USA all over the field from the opening whistle and the Americans played like half of them were not the original players on the original starting team in their original positions, which, as we know (see above) they weren’t. In ten minutes ,the Ticos were up 2-0 and the Americans were still looking around to see where everybody was playing. As the game went on, the Yanks got better and by the second half the lead was down to 2-1 and with the introduction of Eddie Johnson and Altidore, a comeback was certainly possible. However, as happens so often, by pressing forward a team leaves space open at their back and the Costa Ricans countered well to score again. So the United States 12 game winning streak was snapped and we learned that the team does not really have that many interchangeable parts. On top of the loss, the referee went on a late game yellow card spree and by the time he was done three more Americans were out of the Mexico match. As the ref was Mexican, this opened the door for lots of questions, but that is a discussion for another post.

For Mexico, Bradley was still out with his sprained ankle and Altidore was still out also, just for another reason than injury. He was one of the recipients of the ridiculous yellow cards and therefore had to miss the game. Also missing with yellow cards was the previously discussed Cameron and defender Matt Besler. So, once again Jürgen Klinsman was faced with missing starters for multiple positions. This time , however, Jürgen went for option 1 above. He simply dropped in the second tier players for the missing starters and kept the basic system and chemistry intact. In particular, he used Eddie Johnson for Altidore and Kyle Beckerman  for Bradley. Now, make no mistake, Johnson isn’t Jozy. But he does have some definite strengths, mainly his ability to be a beast in front of the goal in the air. Beckerman is a poor mans Bradley, but by putting Donovan in the his outside midfield role and surrounding Beckerman with players in familiar positions, Klinsman lowered the pressure on him. The game was in the very friendly Columbus Crew stadium and the Mexicans came in with a new coach, a miserable record in this competition and even more questions about their team than the Americans had. And their questions weren’t about injuries and cards, they were about talent, attitude and chemistry. Hmm, that makes injuries and cards look minor. After the first 15 minutes or so, those injury and card problems got even smaller. The Yanks started putting things together and by the end of the first half it was a promising game for the USA. Early in the second half, Johnson did his corner kick thing again, as he has done before in recent games for the US and as he had just barely missed on in the first half.

Eddie Johnson scores on a corner kick against Mexico

Later Donovan scored on a nice set up from his teammates and the Mexicans were left wondering if they will make it to the World Cup. Not so for the USA -combined with the Honduras-Panama draw- the Americans are definitely into the finals in Brazil. The crowd in Ohio was crazy, representing the new American passion for the game and for the American national team. I must say, that seeing all those red scarves raised during the national anthem is a stirring site, unseen in any other athletic event. And now, we get to enjoy the World Cup in the best possible way- while rooting for our country. 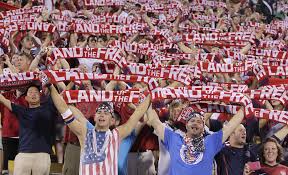 The loud, proud crowd in Columbus!

2 Comments on “We’re Going To Brazil!”