Liverpool, Seattle and the Xbox

The past couple of Sunday mornings,  The Soccer Yoda got out of bed at the ridiculously early hours of 5:00 AM and 4:00 AM.. Now for many this is a commonplace activity, mandated by work hours that require an early awakening. For many others, early rising is a Ben Franklinesque habit, born of the concept that somehow life is better, more productive and ….well.. makes a person “healthy, wealthy and wise” (if accompanied by “early to bed”.) And it is true that a good cup of coffee, a breakfast snack, a beautiful sunrise….these can certainly start the day right for those inclined to enjoy them.  I, on the other hand, don’t have to get up early, nor do I want to awake with the sun. No..The Soccer Yoda enjoys rising to very late mornings (sometimes even early afternoons!). These late risings are preceded by late evenings in a sort of anti- Poor Richard lifestyle (Rich Richard?). The reasons that I can manage this schedule and prefer to do so are two-fold. One- I do not hold a job that requires rising early in the morning. In fact, I don’t hold a job at all. In 2009,  after 43 years of steady employment , I became a victim of the Great Recession, my position was eliminated and I became unemployed. I was able to survive because for most of those 43 years I was saving toward retirement. Granted, I thought it would be the typical retirement – you know, where the employed tells the employer that he/she isn’t coming to work anymore instead of the other way around. Nevertheless, I was prepared for the event. Two- I live in Las Vegas. Vegas is a city that doesn’t get moving until late night. Happy hours , complete with half price appetizers and pizzas, begin at midnight. If a person doesn’t have to wake up until late in the morning, this makes for many late late evenings.

So, what was I doing up at those unheard-of early times ? Getting ready to watch Liverpool play games that would go a long way toward deciding the English Premier League championship, that’s what. Getting ready to watch only the biggest games that Liverpool has played in years. Getting ready to be either exhilarated or depressed, excited or solemn, happy or sad. Liverpool sat on top of the league with 5 games to go, Chelsea in second, Manchester City third. City was the overall favorite for the title, Chelsea is always a top team, and Liverpool was considered an upstart who hadn’t proven that it belonged among the championship contenders. At the beginning of the season City and Chelsea had goals of winning not one , but two league titles, that of the European Champions League as well as that of the Premier League. Liverpool, on the other hand,  was hoping to finish fourth in the Premier League, so that it could at least play in the Champions League next year. Liverpool hasn’t qualified for Champions League play in 4 years. They have had a surprising season, perhaps overachieving, being spurred on by its second year manager Brendan Rodgers. Rodgers has introduced a brand of soccer that’s easy to watch, pleases the purists and gets results. All of this makes for  great soccer , worthy of losing some sleep for any soccer fan, much less a Liverpool fan like myself. This begs the question – why Liverpool? Over the years I knew that Liverpool was one of the better English clubs, winning many titles and cups during the 1970’s and 80’s. But I didn’t follow them, or any European club, for that matter.  I’m not English nor did I travel to Liverpool during either of my visits to England. Up until 6 years ago, I didn’t know of any Liverpool players except Steven Gerrard and I knew of him for his play for England,  not for his club achievements. The answer to the question – why I am a Red’s supporter? Well, it is not any of your typical reasons. I wasn’t born there, I never lived there ( I’ve never even been there), my family could care less, I didn’t see them on tv and fall in love ( well, not exactly). I’m  not even that enamored with their colors.

It’s been said that men are nothing more than boys , just with bigger toys. Yes, I’m guilty as charged! I was completely captured by the first Pong console I owned. It was a great combination of tech, physical skill and competition. It could be played at a minutes notice, in a small space and if you didn’t have an opponent, the console itself was more than worthy. It hit all the points that my game-playing psych thought were important for great entertainment. I eventually graduated to Atari and other versions of video games. As each new advancement appeared on the marketplace, I had to have it. So naturally, when the “soccer” game “Pele World Soccer” was published, I was right there! This game required a vivid imagination to think it was soccer. Three circles moving around a closed area with the aim of guiding the “ball” into a goal was a far cry from the game I had a passion for. But, it said “soccer” in the title (it could have said hockey or pinball , for all it resembled soccer) so I played it a fair amount of time. Gradually though, PC gaming became my tech hobby and shooting space ships full of aliens took up my gaming hours. The development of the Xbox 360 changed all that.  The graphics were excellent, the sound was realistic and (mainly) a game called FIFA, named after and licensed by the international soccer organization, was made for it. Now THIS was realistic. Real teams were included with real players who mirrored the quality of play that they exhibited in the real world. A gamer could manage a team, buy and sell players and then control the players in matches against other real teams controlled by the computer or ( with somewhat less ability to manage the roster) play against other gamers from around the world. I was hooked! But what team to manage? Decisions, decisions! I decided to manage in the English Premier League as I was more familiar with it than other leagues and wanted some quality players to control ( the MLS was not very good at that point). I didn’t want to manage the best team, that wouldn’t be a challenge- the best are supposed to win. No glory in winning with one of the top sides! I didn’t want a bottom team, the computer was pretty good and that task would be impossible and frustrating. So I looked for a better-than-middle- but-not-amongthebest-team and there sat Liverpool, in fifth place at the time. I knew of Liverpool’s history of being one of the best organizations in the soccer world during the 1970’s and 80’s. But it had been years since they had won the real league championship, so if I could guide and play my virtual Liverpool to the top, that would be an accomplishment. So it was “look out xbox computer! Here comes The Soccer Yoda managing Liverpool against you and your soon-to-be defeated computer-controlled players and teams!”

Competing against the xbox 360 was great fun. I skillfully managed my team, won matches and snatched the championship for several seasons. One day, about a year after beginning play with the FIFA video game, I turned on the TV to watch some real soccer and ….whoa….there on the television was a team that looked just like “my” team on the xbox! They had the same uniforms and …wow…the same players… as “my” team! The players on the screen even had a passing resemblance to “my ” players! Well, what do you know…it was Liverpool!…the real one…on my TV! BUT ,there was one major difference: they weren’t managed by The Soccer Yoda, they were managed by some guy named Rafael Benitez…and he wasn’t doing a very good job. They didn’t play like my xbox Liverpool and I grew frustrated watching them….”c’mon, make that pass…where are you running…shoot the ball!!!!”. Then…” that’s more like it…good defense!…great pass…GOAL!!” And, just like that, I was a fan. As time went on, more games were televised until I could watch almost every Liverpool match on my television. Then, my new phone gave me up-to-date bulletins as to player moves and manager quotes and such. When my youngest son bought me a Liverpool jersey as a present, it became official and being a Liverpool fan has been evermore engrossing as the years have passed and especially now, during this surprising and exhilarating season. And, THAT is why I was up in the wee early hours these last few Sundays, jumping up and down,  twisting and turning, and despite my best efforts to be quiet, letting out such a yell when Philippe Coutinho scored the winning  goal against Manchester City…. my wife came running out of the bedroom to see what was the matter. 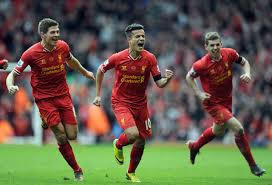 Ironically though, things have changed on the xbox ( now Xbox ONE). A couple years ago, I discovered the excitement of competing with real people on FIFA instead of the computer. Despite the best attempts of programmers, real people are more unpredictable and more fun to play against than the computer (even the new improved version). However, I found that using Liverpool against real opponents was a problem….the team lacked the video game attributes ( the FIFA teams are designed to play very closely to their real counterparts) to compete successfully against good players using other teams that play more efficiently in video games. Eventually ,I gave up using Liverpool and found another team that I can compete with very successfully against other FIFA players—the Seattle Sounders— even the new 2014 Sounders with a somewhat revamped lineup. At present, I am ranked in the top 19% of 220,000 soccer-loving, crazed video gamers who play against each other on the Xbox one. Not too bad for a older guy with slowing reflexes, weakening vision and a couple other things to do rather than play Xbox. (Only a couple, though)

Has using the Sounders in FIFA  turned me into a Seattle fan? Nope, one fanatical fanship per sport is enough. After all, it occupies your time, your emotions and sometimes your pocketbook…….although the other day I did catch myself checking the TV schedule for Sounder’s games………but….I just can’t let myself be a wacko fan of the real Seattle Sounders….it would cut into my FIFA time!