Freedom on the Field

One of the unique features of soccer is the number of players on the field with the freedom to go anywhere they choose. The rules of the game do not restrict their placement or movement other than the temporary restriction of the offside rule. Although it is more efficient for goalkeepers to stay in the penalty area where they can use their hands and protect the goal, the rules allow keepers to roam the field. And in some cases, they take advantage of that freedom and play just like one of the other ten, at least for a few minutes. 11 players free to put themselves wherever they want. I know of no other sport with so many participants having so much leeway. It is this freedom that inspires teams to play with so many formations and styles. It is one of the reasons why soccer games can look so different, even when involving the same teams.

Take Barcelona for example. This past week they played two very important matches ….. important for very different reasons. Although Barca was the same, their opponents were not and neither were the circumstances of the games. And so we saw just how different the game can be played when opponents have different objectives, even when the team in question plays the same.

The first match Barcelona played involved Juventus, from Italy. It was the second game of the quarterfinal round played between these two teams in the European Champions League. The Champions League is arguably the most prestigious club competition on the planet. The top club teams in Europe all wish to claim the title of European Champions, it is the highest honor a club team can win, even surpassing the World Club championship in which the winner gets to compete. This is due to the high number of excellent teams in Europe.

The round is played in 2 matches, one in each home stadium. The first contest was in Italy and Juventus won 3-0. Given Barcelona’s reputation and their number of star players this would typically be considered quite an upset. But this year Barca has had a very inconsistent defense and displayed an even more inconsistent intensity of play. The team consists of many players who have accomplished just about everything there is to do in world soccer and sometimes they have appeared to be tired of it all. Of course, other times they get truly motivated, display that tremendous skill and flair they are known for and remind observers of just how good they can be when they want to be and when their shaky defense isn’t being tested. They displayed that exact manic nature in the previous round when they fell behind to Paris St Germain 4-0 in the away match and then pulled off the most amazing comeback in modern soccer history by scoring 3 times in the last 7 minutes of the home game to win the round 6-5. So entering the home game down three goals was not a totally lost cause.

Now, lets consider that positional freedom we have talked about. Here is Juventus’ formation: 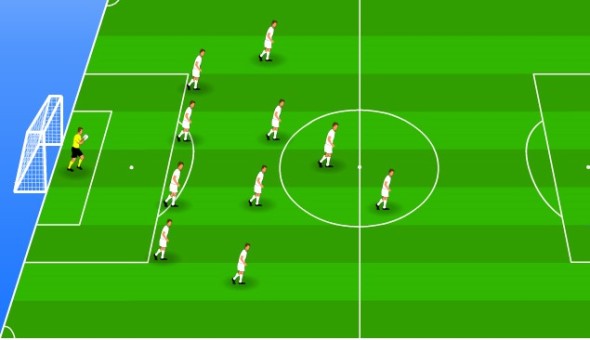 Going into Camp Nou, Barcelona’s famous home stadium, with a 3-0 lead, defense was the order of the day. Although Juve often pushes more players forward, especially against weaker opponents, they knew what they had to do in that second Barca match. Barcelona, on the other hand plays a 4-3-3 virtually all the time and this was no different. Of course many teams have attempted to play defense against Barca to no avail. Those teams typically get rattled under the constant intense pressure, make a mistake and pay for it by giving up a score, then try to play more offense, and end up giving up more goals. But this was different. For one thing Juventus has that strong Italian defensive mindset and they have the quality players to go with it. And they have Gianluigi Buffon. Gigi Buffon was considered the best goalkeeper in the world for decades. He is now 39 years old and yes, there are a few keepers in the world considered better than him at this point. But very few. He has won virtually every team championship available except this one….something of which his teammates are very much aware.

Once the match started Barcelona threw it all at Juventus and the Italians held. The home team fired 19 total shots and ended up with one on goal. One… 19 shots and one on goal. You read it right. Actually Juve came closer to scoring in their few trips forward than Barcelona did with their 19 shots. Messi was off, Neymar overdribbled, Suarez disappeared. The score of the game was 0-0 and Juventus moved into the semifinals of the tournament with their 4-1-1 while Barcelona had no rest. 5 days later they moved into their next match, one that holds the complete attention of the soccer world and a match that might even mean more to Barca than did the Juventus contest.

If there is a club in the world with a greater winning tradition than Barcelona it is Real Madrid. The Blancos have been among the worlds elite since the 1950’s and this year’s edition is following in prior Real team’s footsteps. Since both clubs play in Spain’s first division they meet at least twice a year and their meetings are so momentous they are called El Classico. Both teams use 4-3-3 formations although the manner in which they move within those systems differ somewhat. Going into the match Real was leading the league with Barcelona not far behind but needing a win to narrow the gap.

Barca was missing Neymar who sustained numerous bruises after the Juventus match and Real lost an already hurting Bale during the first half, so things were fairly even in regard to injuries. From the very beginning, this game was nothing like the Juventus contest. Both teams attacked, both teams were determined to score first, both goalkeepers were called on to make great saves. Finally a Real shot rebounded off the near post and went across the goal to an unmarked Casemiro, a Real midfielder who had come forward and was alone. He took a second to control the ball while 3 Barcelona defenders pulled a youth soccer mistake and watched him without moving. 1-0 Real Madrid. Meanwhile Real was beating up Messi, hitting him both legally and otherwise, knocking a tooth out and motivating Lionel to prove he could not be intimidated.

Sure enough 5 minutes after Real’s goal, he took a pass and worked his way past 2 defenders to tie the game. The second half was even crazier than the first. Again both teams attacked well and at 72 minutes Barcelona midfielder Rakitic scored with a great left footed shot to put Barca ahead. Note that 2 of the three goals scored at that point were from midfielders; these teams freely use the liberty given to players by the rules. 5 minutes after Rakitic’s goal the game defining event occured. Sergio Ramos, Real’s best defender, dove in with both feet in order to take down Messi. The ref didn’t hesitate pulling out the red card and suddenly Madrid had only 10 players on the field. Although Real manager Zinedine Zidane had a number of options to move players back from midfield positions to keep his team at 4 defenders,he was trailing with only about 15 minutes left so he left his team with the 3 remaining backs. He told his 6 forwards and midfielders to attack Barca’s goal while moving his defenders back, thus isolating them. The strategy paid off 6 minutes later when, amazingly enough, James Rodriguez took advantage of more sloppy defensive play by Barcelona to get free and tie up the game. Although a draw might have seemed a satisfactory outcome for Real at this point, Zidane wanted to win in front of his home crowd and his tactics, although very risky, were working, so he kept at it. For the next 9 minutes Madrid controlled play and hammered at Barca’s goal, 10 men or not. Finally, in the last minute of stoppage time, Barcelona got possession of the ball and poured up the field, driving at those 3 Real defenders left stranded by Zidane’s strategy. 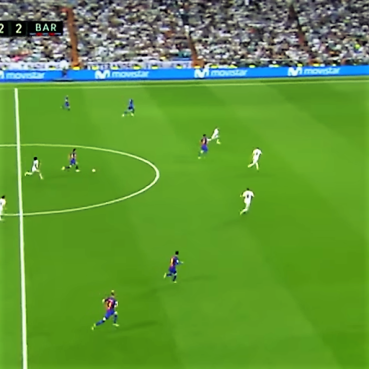 As seen above, Barca had a 6 to 3 advantage as they ran at Real and they took full advantage by pulling off something the Soccer Yoda had never seen before in all my many years of watching and participating in thousands of soccer games. Messi, using the space afforded by his teams numerical superiority, took a left footed shot into the lower right corner of Real’s goal and scored with the very last kick of a non-sudden death game. A walk-off goal. An amazing ending to an amazing game. He then, uncharacteristically, rubbed it in by taking off his shirt and waving it at the home crowd. 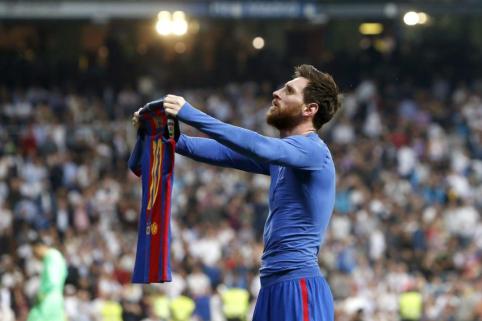 Messi lets the Real crowd know who won the game.

So, in the span of 5 days Barcelona played in two very important, but two very different kinds of games- games that were defined by the skill of the players of the teams and the rules that allowed them the freedom to use those skills in the manner that they and their managers felt would best suit them at that time. And that is the major reason, among others, why this game is the #1 sport in the world.