Arena at the Azteca…changing perceptions.

Last week the USA men’s team was back in action for two very important World Cup qualifying matches. After stumbling to 2 defeats in their first games which led to the replacement of Jurgen Klinsmann with Bruce Arena, the team had earned a win and a draw in their next 2 encounters, thus putting them back in the middle of the contest to earn a spot at the World Cup in Russia next summer.

The two matches were against Trinidad and Tobago at Dick’s Sporting Goods Park in Commerce City, Co. and against biggest rival Mexico in Mexico at the Estadio Azteca near Mexico City. While the first game was figured to be a must win and very doable… being at home and against the last place team in the hexagonal group, the second was considered equivalent to (in the immortal words of Jim Croce) tugging on Superman’s cape and pulling the mask off the old Lone Ranger.

By the time the match ended in Mexico there were many American soccer fans (including this one) whose prior perceptions about the USA team will have to be reconsidered, if not thrown out entirely. Bruce Arena went out on a very long limb which proved to be much stronger than most anybody would have believed. As a result, there are some new thoughts about the USA men’s team that counter these former ideas:

1. WRONG – The USA has only a handful of players that can be consistently counted on in international matches        Prevailing thought was that once you got past Clint Dempsey, Josie Altidore, Geoff Cameron, Tim Howard and maybe…Michael Bradley, there were no more players that could perform adequately on the international level for the USA. The first game seemed to strengthen that thought.

The USA lineup vs Trinidad and Tobago

The 11 players who started against Trinidad totaled 715 appearances for the USA. Five of them had been in more than 55 games each for their country. It was a very experienced group but that was expected. Then Bruce Arena came out with his lineup against Mexico and surprised almost all of those who follow the USA. 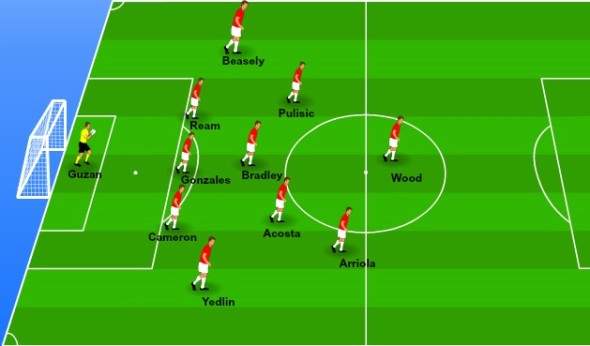 This lineup kept only 4 of the 11 who played against Trinidad and Tobago. There were 536 appearances for the USA in this group, 179 fewer than the Trinidad lineup. The difference is even more notable in that only 2 of these 11 had more than 55 games for the USA and those two had almost 50% of the international experience of the total lineup. In addition, one of those two – DeMarcus Beasley – actually retired from international play in 2014 and although he came back a year later, he had only played once for the USA since then. In the hours between Arena announcing the lineup and the beginning of the game, fans of the team shook their heads and wondered what the heck he was thinking. And then the USA pulled a draw in the toughest place to play in the region. So it turns out that there are many more internationally capable players in the US than fans had thought previously.

2. NOT AS CORRECT AS MANY THINK – The US back line is its weakest link and cannot stand up to constant pressure from any decent international team          In the World Cup 2014 elimination game against Belgium, the USA held off a very good opponent for over 90 minutes before finally succumbing in extra time. But that effort was due to Tim Howard’s amazing performance, stopping 18 shots. The American back line did little to help him that day. Recently they gave up a late goal to Mexico, 4 scores to Costa Rica in a dreadful effort and even after Arena took over they allowed Panama a soft goal that took a possible excellent win away from home and reduced it to a merely satisfactory draw. Even the shutout of Trinidad was not without some scary moments in front of our goal. So most observers looked for the Mexicans to riddle the USA back line, no matter who played there. Arena did figure he needed some extra help on defense and played a formation which had 5 backs for the majority of the game. The idea was to give up possession to the home team but keep them from threatening the goal and look for chances to beat them with counter attacks. This was crazy according to most all experts. How many times have American fans and commentators said, over the years, “we must have more possession to take the pressure off the back line”? But, except for just a couple moments, those 5 held firm despite Mexico’s possession. The Mexican goal came from a rare fast attack on their part and was the only shot on goal of the game for them (shots that hit goal posts are not considered “on goal”). Mexico had 73.8 % possession and only one shot on goal…..and not that many other shots either. Guzan did not have to do a “Tim Howard vs Belgium” imitation and the USA defense gained in reputation, at least for now.

3.WRONG IN CERTAIN SITUATIONS – USA players do not have the ability to change tactics in the middle of matches     The USA national team has had numerous successes over the years with varying formations but most observers have felt that lack of experience at high levels keeps Americans from having the savvy to change attacking  ideas during matches. That idea must be reexamined now and it was the Trinidad and Tobago match that showed a higher level of tactical awareness than previously attributed to our national team. At the beginning of the game the USA came out with a 4-4-2 formation using the two outside midfielders as withdrawn wings. Arena wanted them to stay as outside as possible in order to spread the T&T defense. This left Michael Bradley isolated in the middle so Pulisic came back on most possessions to offer Bradley an easy forward pass that kept the ball on American feet. (step 1 below)

Pulisic frequently played the ball back to Bradley who then got it outside to either Johnson or Nagbe (step 2 above). They, in turn, either took the ball down the outside themselves or passed it inside and then got it back down the wings. This produced a wave of USA crosses into the T&T box but, except for one good contact by Altidore, there was little danger to the Trinidad goal. The tv commentators were not happy with the American first half and even the former General Secretary of the Trinidad and Tobago Football Association commented to me,”T&T central defenders are quite good in the air. I am surprised at Arena’s approach..”. As the second half wore on things changed. There was opportunity to advance the ball more centrally and the USA spotted it. Nagbe beat one defender on the dribble and ran past another before sending a pass to Dempsey who was posted in the middle. 3 nice passes later Pulisic, who had more freedom to go forward than in the first half, poked in the first American goal.

Later on Yedlin took the ball through the same space, made the same pass (but to Altidore this time) and the return found Pulisic. Goal number two assured victory and both goals resulted from a change in attacking method during the game. Americans can spot openings and adjust during matches after all.

4. NOT RIGHT NOW – Michael Bradley needs to be replaced in the USA midfield         Michael Bradley has been THE central USA midfielder for 10 years . He doesn’t have the speed to beat defenders to the goal and frequently not to the ball either. He isn’t a strong defender who can shut down quick opposing attackers. If he is placed too far forward he frequently gets pressured into giving the ball to the other team. So what good is he? That is a question which has been asked more and more frequently in the last couple years. What Bradley does is often unnoticed by the general soccer watching public. He plays best as a withdrawn central midfielder and often acts as the “quarterback” of the team, placing passes…..settling the team down when needed…..aiding with defense by helping other defenders and occupying spaces that the opposition would like to operate from. Most of these tasks do not grab the attention of the viewing and cheering public. Earlier in his career he scored more goals than recently but he was given a more offense role in those days. Still, he has contributed directly to goals like his long-range strike against Honduras which probably surprised more Americans than Hondurans. So his game versus Mexico came as a shock to many USA fans…..and an earth-shaking event to those Mexicans who thought the USA would roll over at the Azteca. He caught Chicharito unawares to steal the ball, then, seeing Mexican keeper Ochoa off his line, he chipped a perfect 35 yd. ball to put 85,000 home fans into a state of absolute silence.

He marshaled the defense that we have already discussed and came within inches of pulling off another incredible strike and winning the game. As a result there are now some observers claiming that Bradley might be the best American player ever….which is probably an overreaction to his terrific game. Others are merely stating that his goal at the Azteca was the best American goal ever scored….which could very well be correct.  Wherever he and his goal land in the history of USA soccer, one thing is apparent after last weekend…..at this time, the USA doesn’t have anyone else who can do Bradley’s job as well as he does. Kellyn Acosta, Darlington Nagbe, maybe even a withdrawn Christian Pulisic….in a few years one of these players or a combination of them or perhaps someone not on anyone’s radar right now could take over the vital central midfield position for our national team. But right now it is Michael Bradley, period.

The USA did not guarantee a place in the World Cup with these last two matches, but they certainly moved closer to Russia with their results. Perhaps more important, the make up of the team, it’s quality, it’s depth and it’s capabilities seem to be changing and improving. We need to look at this team differently, it is better than we thought.