← For USA Soccer – A Big Month
Liverpool, Manchester City and the VAR →

The Soul of Soccer

Posted: May 14, 2019 | Author: socceryoda | Filed under: Uncategorized |Leave a comment

The Unites States of America is a large country, especially when compared to those nations crammed together in Europe. And there are large bodies of water which separate us from the other continents on Earth.

So, even though we engage in the sport of soccer with its huge international scope, it is easy to forget how far reaching it is when we become deeply involved with our local teams and clubs and players and forget the connections, learnings and impact that the game can impart on us when we go outside our boundaries.

This was never made more clear to the Soccer Yoda than this past week when my youngest son and I traveled to England to watch the second leg of the Liverpool vs Barcelona Champions League series.

To fully appreciate the happenings of the week, lets review the situation as we boarded our plane in Las Vegas for the 10 hour flight to Manchester followed by a short train ride to Liverpool. I am a major Liverpool fan for reasons explained in a previous post ( “Liverpool, Seattle, and the Xbox” ). My son, on the other hand , roots for Barca, and we made a pact years ago that if the two clubs ever met in a regular season (not friendly) match we would be there. Given that Liverpool plays in the English Premier League and Barcelona contests in the Spanish La Liga, the chances for such a matchup are rare. There is only one competition which could provide the groundwork for a meeting between these two clubs. That is the European Champions League, but that requires qualifying for the competition in the first place, something that has been too much for Liverpool in some years. Then, the two teams must be drawn together, and with seedings, pots and 30 other squads involved, the chances have been slim. However, if the teams advance in the tournament, the number of other clubs is reduced and the chances of meeting increase. And this year they both made it to the semifinals where the odds finally threw them together. The semifinals are a two match affair….home and away…with the combined score deciding the winner and away goals counting extra if the score is tied after both games are done. Two weeks ago the teams met in Barcelona and the home team emerged with a resounding 3-0 victory that gave them a huge advantage coming to England. In addition to the mountain to climb that the score provided, 2 of Liverpool’s starting forwards were ruled out of the second contest due to injury. Facing the arguably best team in the world who is led by the best player of our time in Lionel Messi, it was deemed that , for Liverpool, advancing to the final was a nearly insurmountable task.

And if THAT wasn’t enough, the two teams also faced competition to win their respective national leagues, although with very differing situations. Barcelona had already won their La Liga championship, giving them the luxury of resting most of their starting team in a match 3 days before the Liverpool battle. Liverpool, on the other hand, was involved in a dogfight with Manchester City for the English Premier League title and they played a tough match with Newcastle on Saturday night, one in which they won in the 86th minute and cost them their leading scorer.

So, we arrived in Liverpool the day before the showdown looking at a game which looked like a Barcelona walkover and a boring trip while we were there. However, fan intensity, match occurrences and the international nature of soccer made it anything but that.

Manchester City was playing a league match against Leicester City on Monday night. The outcome had direct implications on the English championship in that if City failed to win Liverpool would jump into the league lead. So we looked for a place to watch the match and have some dinner….which turned out to be task. The first sports bar we entered was nice, not very big and an hour before the game completely reserved by Liverpool fans….no seats available.

A nice Liverpool sports bar….. with all seats reserved

After looking at other unsuitable venues we finally found an establishment built in the same style as a German beer hall.  It had long benches and three floor to ceiling HD screens each with the same match on it.

By the time the game had started the place was filled with Liverpool fans, watching and hoping for City to falter. They cheered every Leicester move and groaned at missed chances or poor play. 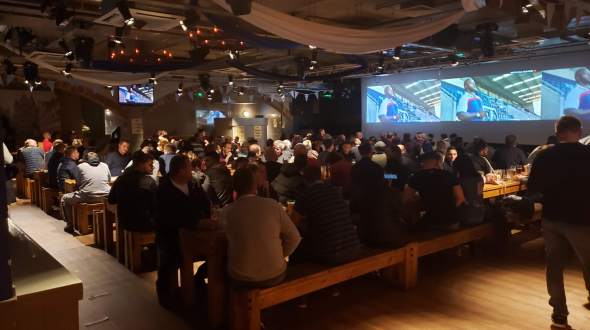 The crowd rooting against a Manchester City victory.

They especially groaned when City scored on a rather miraculous long shot. One very interesting point was the number of fans there that hailed from places other than Liverpool or England for that matter. We chatted extensively with fans from Norway, representing the Norwegian Liverpool Fan Club. While Norway’s own soccer teams have loyal followings, many Norwegians also root for international teams, and there are 40,000 official members of that Liverpool club. Now 40,000 members of a fan club may seem like a lot in any case, but Norway has only 5 million citizens. If one equates that percentage of the Norwegian population to the population of the United States, it comes to over 27 MILLION official members of a fan club for a team not even in their country! The Norway Liverpool Supporters Club had chartered a plane and over a hundred of their members had made the trip to watch their favorite non-Norwegian soccer team in this big match. Manchester City used that goal to win and the crowd left disappointed, looking forward to the next evening’s match, and rather well filled with beer.

The next afternoon we took a walk through the nearby center city of Liverpool and came upon another ritual common in these international meetings….away fans, having arrived early….cheering and singing in anticipation of the game. And in this case, they were across the plaza from the hotel in which the Barcelona team was staying, which increased their fervor as they contemplated the expected victory that evening. 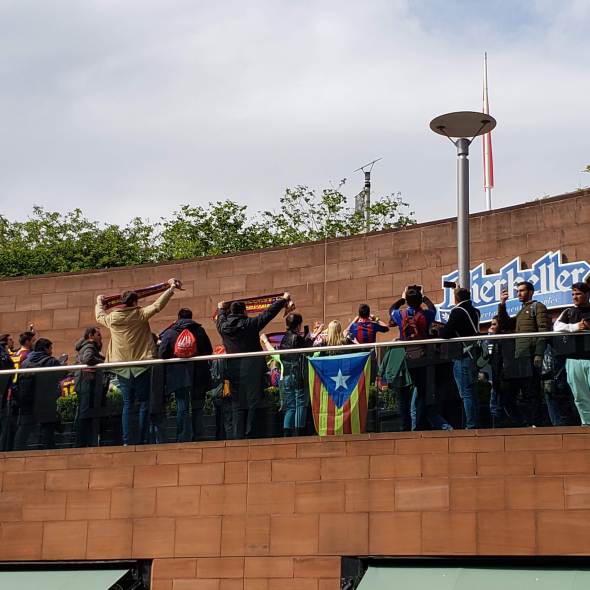 Once, English hooligans used these pre-game activities to engage in fights but now things have calmed down and physical confrontations between supporters of opposing clubs are much less apt to occur. The Barcelona bus, used to take the team on necessary travels while away from home, was parked in the hotel driveway and although it was several hours before the players would take the short ride to the stadium, there were already Barcelona fans lined up to catch a glimpse of their heroes as they boarded the vehicle. 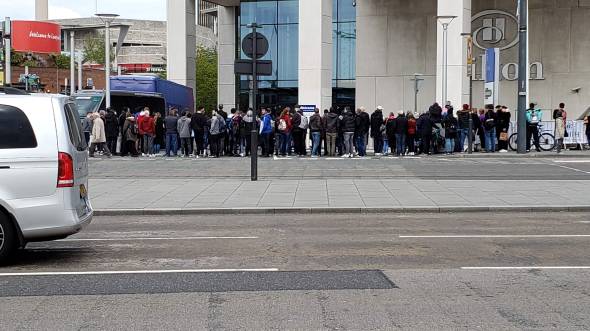 Barcelona fans lining up hours before the team boards the bus.

Finally the game was at hand. Liverpool’s stadium, Anfield, has been a fixture in the city since 1884 and has such a revered history that the new (as of 2010) owners, the Fenway Sports Group (who also own the Boston Red Sox) added 8,500 seats in 2016 to raise capacity to 54,000 rather than build a new home for the team, which was their preferred action. The crowd at Anfield is known throughout the soccer world (which means most of the whole world) for its ability to raise the performance of its team and to rattle the opponent. The intimidation begins before the opening whistle when the loudspeakers blare out the Gerry and the Pacemakers version of You’ll Never Walk Alone. This has been the anthem of the club since 1963, the version is by a Liverpool group and the title is even on the Club’s coat of arms. The entire crowd sings with the recording as reverently as any church hymn. But the real 12th man work comes after that.

I have attended many professional sporting events. I’ve had season tickets to the NFL and the NBA and seen more major league baseball games that I can remember. American sports audiences watch, sometimes cheer, watch, get excited at a good play and then watch some more. Even in Seattle, which has the reputation as the loudest home crowd in the country, this was the pattern at the NFL playoff game I attended there. But international soccer crowds are different and the Anfield throng represents the difference more than almost any other. They never stop making noise. They have a memorized song for each player and several songs and chants for the whole club. They sing, chant, get excited for a good play, sing some more. They only stop to either throw epithets at the opposing players if they are deemed to “cheat” ( which means foul or dive) or to go crazy over home team goals. International soccer crowds participate in their events far more than American sports fans do at theirs and at Anfield that night the combination of team performance and fan involvement, at peak levels for both, was too much even for the experienced, talented, and 3-0 ahead Barcelona squad.

Regular readers of the Soccer Yoda know that typically we discuss tactics and strategies and skills. But not in this post. And although tactics certainly played a part in Liverpool’s miraculous comeback, our discussion here deals with the coming together of so many differing people that this sport facilitates. We met Norwegians, Swiss, other Americans, Indians, etc. all drawn together by the magic of their soccer team playing for a huge prize. And as Liverpool scored each goal leading to their 4-0 victory to wipe out Barca’s advantage, the Anfield multitude became louder and more persistent ….at first not believing what was happening but then realizing that they were watching soccer history and not just that of their favorite club.

Finally, when the game ended, the players embraced, the fans embraced, the Liverpool bench ran onto the field and then, appropriately enough, the strains of You’ll Never Walk Alone rang out. And the entire Liverpool squad and the delirious, exhausted but now believing stadium joined together to sing and celebrate. 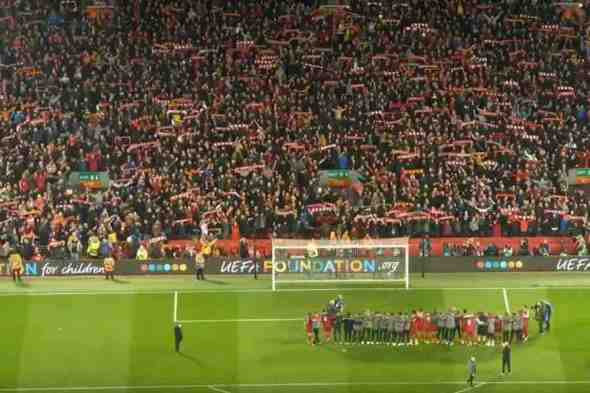 All of Anfield sings together.

And the Soccer Yoda wondered how long before the USA really experiences the immersion of commonality that this universal sport offers. The Barcelona papers commented the next day that their team had fallen to the “soul of Anfield”. But I think it was bigger than that, it was the soul of soccer manifesting itself in that northern English stadium that night. The same soul that is present in thousands of clubs, stadiums and fields all over the world. And as separated from other nations as we are here in the USA, the sport offers us the opportunity to join in that soul, that common experience, with so many of the rest of the world. I can verify…..its a unique and fulfilling experience.