Developing Our Youth – Getting Better or Not?

A few nights ago I read a blog post written by a veteran youth coach in which he echoed a problem that’s been discussed by youth coaches for decades, including yours truly. He discussed the fact that very few youth play “street soccer”. Instead, the majority only gain their soccer experience through an “organized” training session or an officiated match. During matches the objective of the game is to score more goals then the opposition ,therefore any actions which prevent that stated aim from happening are considered to be negative. In many training sessions, the coach runs the training in a manner that fits only that coaches idea of a proper session or perhaps oversees a practice session with methods that he/she has been directed to use.

The difference between informal street soccer and formal soccer sessions is one of intensity and perceived outcome. Kids don’t play in the street or playground with a major objective of winning whatever game they play or even to necessarily improve their play (although that might be an unintended result). They play because it is FUN. Plain and simple, it is fun to play soccer…win or lose, effective skills or not, high level conditioning or only incidental fitness..there is joy in playing the game. Since only kids are involved, typically any results of a numerical nature are forgotten as soon as the playtime is over. Of course, this means no real pressure on the players, so if a player decides to try a tricky move or difficult pass and fails, well it is no big deal. Depending on the child, the skill might be forgotten as too tough to do …OR …it might be repeated and repeated until it becomes part of the game skillset owned by that player.

Soccer practice in many countries – better than formal training?

What about organized training sessions? The potential problem compared to street soccer is the nature of the session. There is an authority figure involved, therefore there is a motive to please that person. Often parents watch training sessions and that, of course, introduces a myriad of possible complications. Although the training might be an effective teaching and practicing period and might lead to higher level match performances as the player gains in experience and skill, it might not. And the pressure to win those matches can certainly affect the manner in which youth players approach and play those games. Often the “win the game or tournament or trophy or higher ranking” mentality stifles creative play and drives coaches to methods of training which have little to do with 1) improving the mental and physical soccer skill of the players and 2) having fun.

Ok, so this has all been discussed for decades, so what struck me as I read the blog post mentioned above? Well, the writer is an ENGLISH “football” coach writing about youth “football” in ENGLAND! “Wow” I thought, “they have the same problems that we, here in the USA, have!” That was a revelation. Here in America we have attempted to overcome the lack of street soccer “training freedom” through the dual methods of education and rule changes. How well does that work?

First of all, several fundamental truths must be accepted in regard to developing soccer talent.

Given the above, it stands to reason that the more attempts at technical and tactical skills, the faster the player will raise his/hers playing level. When one compares the opportunities available in informal play versus organized training, the latter can be the more efficient experience, IF the coach provides for those opportunities. Here’s why : During free play a youth might attempt a move a certain % of the touches played by that player. Given the number of players in the game and the circumstances ie: size of goals, playing surface, etc., this will result in a certain number of attempts which will or will not be successful. Maybe many attempts, maybe not. Eventually, if the player keeps trying, the success rate should improve. But, in an efficiently designed training session, the move will be demonstrated and each player will be given a chance to try the move multiple times without pressure. Repeated practice will improve the proficiency of the move. Then an opponent will provide slight pressure and the player gains an understanding of the use of the move against opponents. Finally, full pressure is applied and the player joins a limited number of teammates in trying the move in a game situation. This type of training accelerates the learning rate many times over. So….why the lamenting over the lack of street soccer?

young players at soccer practice – learning to wait in line

Unfortunately, the type of training described above continues to be in the minority. For decades the mantra “no lines, no laps,no long lectures” has been advocated by knowing soccer coaching instructors and yet the lines, the running without a ball, the sargent-like command direction continues. And apparently it has also become prevalent in England. Waiting in a line for 90% of a practice exercise does little to prepare a youth to be a player. Running laps? Karl-Heinz Heddergott, a well respected German first division professional coach once told me,” do you know what you get when your players run lots of laps? Good lap-runners!” Formal training can be very effective…IF the players get a maximum of touches on the ball and a maximum of play in game-like tactical situations. A coach I know told me recently of the question asked of him by his new U-14 team (all of which had been playing for years) which indicates the problem: ” how come we play soccer all the time in practice?” The players were so accustomed to non-ball and non-playing activities that the all-ball all-active sessions they were experiencing were strange to them! 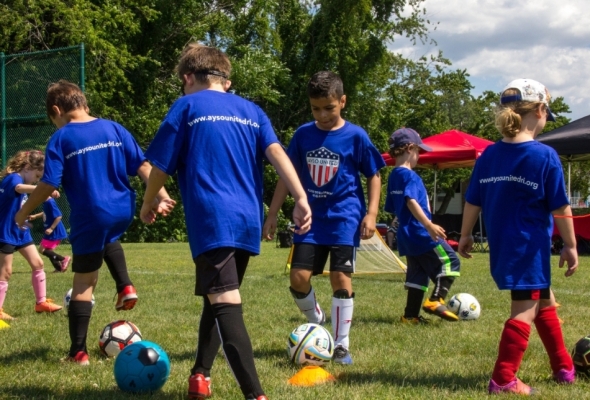 An effective youth training – each player with a ball

As for the joy of the game? The proliferation of trophy competitions has only increased the pressure to win a sampling of those competitions. THere are at least 5 competitions for clubs which declare themselves to be “National Championships”. Each has the requisite number of lead-up championships to the big one. Each allows winning clubs to advertise their accomplishments so as to attract more fee-paying parents. Each drives coaches and parents to demand results in the win column, which often reduces the emphasis on quality of play.

One would like to believe that these adults would see the long term connection between quality of play and victories. But patience tends to run thin in American youth soccer circles. It takes time to develop skills in soccer players and meanwhile the mistakes made in attempting more sophisticated play can cost games. After years and years of trying to send the message to youth coaches through its licensing program, the USSF finally took another tack 3 years ago and changed the rules for all players u-12 and younger to encourage more touches on the ball and more creative play. The results of these changes, if there are any, would only begin to now be felt at the upper youth levels. Certainly recent results of our men’s national teams have been decidedly worse than in previous years and while the women scored another World Cup win, the younger girls teams are not dominating the international scene as much as before. But there is a crop of new young players who are growing up under a different set of rules than before and one can only hope that they will display a style and skill that shows a positive effect of these changes. Early results have not been encouraging. Our USA U-17 boys team is a unit almost completely composed of MSL youth program players. One would hope that these youngsters are receiving effective training from our top professional clubs. And yet, their results at the recent U-17 World Cup were our worst in decades. Granted, there were other complicating factors, like mainly the coaching situation right now with all our national youth programs, but those results were not encouraging. However, it is still way too early to pass judgement on the rule changes, the next few years will be very interesting in that regard.

Meanwhile though, here is a few tips for youth coaches in England: no queues, no running round, no chin wags !

If the reader would like to learn more about advanced tactics and effective training methods teachable to youth…Warning! Shameless Plug Ahead! Concept Soccer – A Step by Step Method To Score Goals and Develop Players is available from Amazon….written by the Soccer Yoda!