← USS Federation and Its Freakish Failure For Females
Developing Our Youth – Getting Better or Not? →

It’s an observable fact that many human skills started as individual attempts to produce a product which differed from person to person. The finished product was unique, other people recognized the style of the maker and therefore those products were considered as “art”. Centuries ago skills such as shoe-making, clothes production, food preparation, even medical treatment, were basically art. Many still are. Knowledgeable observers can recognize music, paintings, even food, by the people who produced it because of those differences. But what about other endeavors? How come autos, clothes, shoes, etc are more standard than in decades past and when improvements and changes come, it happens so much more quickly than years ago? It was the introduction of technology into the development of the various products. As technology improves and becomes more involved in the inspection, analysis and development of a product, there tends to be less art and more “science”.

So, what does this have to do with soccer? Well, one of the attractive parts of the sport is the combination of art and science that is unique to soccer. Many fans value the individual skills and decisions made by individual players above team -oriented play. Others appreciate a 10 pass- five player combination that results in a great chance to score or an impregnable line of defense above an individual run through half an opponents team. Its a personal preference. But that preference has been made easier through the years by a lack of technology involved in the preparation of the “final product”.

Soccer has been a sport bound by tradition. Rule changes come slow and the nature of the game on the field tends to change slowly compared to many other sports. It comes, to an extent, from the top, after all FIFA still doesn’t recognize the invention of the stopwatch. Public outcry, encouraged by technology itself in the form of the massive increase in viewership and replay observations of fans watching television, pushed the introduction of goal-line technology and, more recently, VAR rulings on game play. But, how about increased technology in the analysis of the game and of its players?

For decades the scoreline of a match consisted of the score, who scored and when, and warnings given. A very detailed report might have included the numbers of shots taken by each team; maybe the number of saves by the keeper, perhaps it might have included the number of corner kicks. Those events were easily seen during the course of play, the only necessity was a pair of eyes, a recording instrument and the ability to count. And many fans liked it that way. The intrusion of statistics and “science” into the game was something not welcomed by lots of fans. They preferred the”art” of the game and the lack of numbers encouraged each person’s idea of what was considered to be good play.

However, time marches on and so does technology. And in the last couple decades the introduction of many types of measuring devices has changed the observations of the game and its players. Now, when analyzing a game, observers can look at how much running was done, where the team and individual players spent their time during the match, numbers and percentages of successful passes and many other statistics. Technology has changed the manner in which teams and players are viewed and their various successes and failures on the field. Training also has been affected. Players wear measuring devices during practice and coaches can tell how hard they are working among other measurements and can adjust team and personal training according to those measurements. Professional teams often hire computer skilled people for the singular task of measuring data on their players and the team as a whole and at times those observations have made meaningful contributions to results on the field .

But what about the youth club? What about the individual parent and players? Have the technological advances affected them in any notable manner other than home videos to post on social media? Not so far. The expense, the time needed and the expertise to judge a players performance and degree of improvement, has been beyond the scope of the average youth club and player family.

That situation, however, is about to change. A new company titled ” Darkhorse” is putting together a package of services that could offer in-depth information on youth player performance in training and matches to those who are most interested in obtaining that data. Darkhorse is headed by some notable people, particularly Dr. Juan Delgado, formerly of the world-renowned Aspire Academy and presently heading up the academy program for the soon-to-be MLS Austin F.C. He is working with an impressive international team from diverse backgrounds who are working together to produce a service that could aid in educating American families on their youngsters progress (or the lack thereof). The information that Darkhorse is considering includes typical measures such as shots taken or passes connected, but also adds in-depth analytics including possession retention, number of ball touches, 1-on-1 duels and the success rate of those duals. This data is presented in a number of ways. Number charts are used, but more visual methods such as line graphs and pie wheels are supplied also. Even less empirical data can be viewed. Soccer IQ, general technique, appropriate speed of play; these and other more subjective traits can be measured against each other as player areas of strength and opportunities for improvement. Its a treasure trove of information about each player and the observations and measures can be expanded to include a whole team or even a whole club if desired. 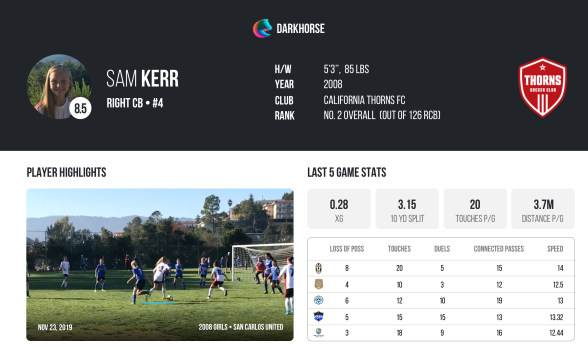 So, one might ask (and I did), how does Darkhorse figure to obtain the game information in order to display it in such an appealing manner. The folks at Darkhorse were most accommodating in answering questions, at least as far as they could, considering that it turns out that they are in the process of developing and patenting some unique and therefore confidential ( at least at this time) hardware. 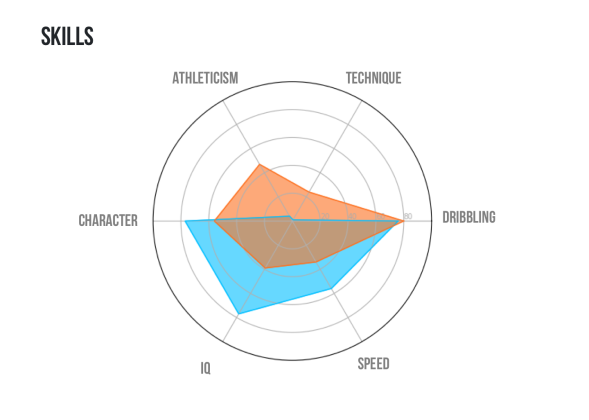 A comparative skills graph on a player

The game information is gained by the use of match video and wearable technology put together in a patent-pending system. This information is then examined for the statistical analysis and visual displays delivered to the client. Individual videos can be supplied by parents or the club. If they aren’t very usable Darkhorse can tutor the camera person or can be hired to do the video recordings themselves. Subjective observations would be provided by the Darkhorse staff along with some interaction with club coaches. This is very important. Darkhorse would act as a coaching/technical directing counseling source to the individual coaches and clubs. So, they get a knowledgeable guide to illustrate training opportunities that can maintain strengths and improve lower performing areas. That way the players are sure to work on skills that will advance their game. 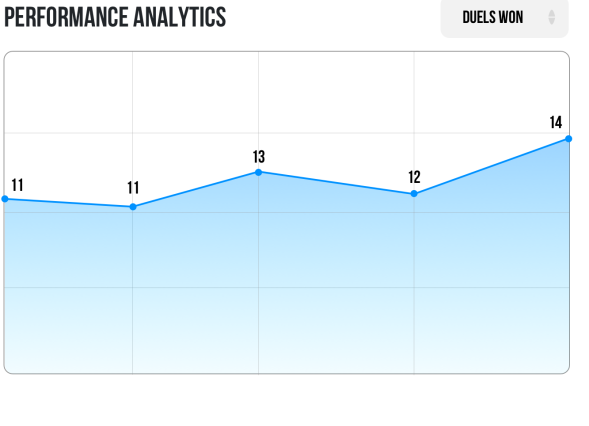 So, who is going to be interested in this revolutionary source of analysis for youth players? Darkhorse is aiming at three main customers who are linked in their desire for information like this, which has been traditionally very difficult to obtain:

A) The clubs themselves – If a club is interested in improving performance, both in result outcomes AND player development, this information can be invaluable. It’s been said many times, by many observers (including the Soccer Yoda- like many many times!) that the youth soccer executives of this country are so focused on winning that they ignore the development of the skills that would increase the standard of play while also improving the results of our players in regards to other countries. With this type of detailed statistics, clubs can put more effort into player development which can lead to more success on the field.

B) Parents and Players – measuring improvement without aids like those that Darkhorse is developing is a difficult proposition. The viewpoint of a parent or even a player, can be very biased, especially if the background knowledge of the sport is as sparse as it is for many of these participants. Quantitative and qualitative analysis delivered by knowledgeable observers can offer families a roadmap to improvement, which, if it is deep enough, can involve the third customer.

C) Scouts – There are now a multitude of options for the talented youth player that were not available in the past. The number of domestic professional club youth programs is constantly increasing. For the extremely talented youth even Europe could be a destination. And colleges are always looking for good players who are also decent students. As the number of quality players and the number of places for those players to advance to continues to increase, the ability of both groups to communicate to the other becomes more important and more of an issue. The kind of data that Darkhorse is going to provide to scouts can be used to attract opportunities for capable youth players. At the present time this type of information is not available to average families and clubs who boast above average talent, Darkhorse is planning to bridge that gap.

Perhaps the most important impact of a measurement service such as Darkhorse is developing, is the ability for parents to gauge the improvement of their kids. This is a big problem for a sport that has struggled to drag clubs and coaches past the “win now” mentality that can retard the technical and tactical growth of young players. If a youngster takes piano lessons for 3 years and still plays Chopsticks at a recital, parents know there is a problem. But if a youth soccer player is still at a basic skill level, just bigger, than in previous years, it’s not as apparent to many parents. Skill measurement can clue in those who are footing the bill as to the real progress of their child and perhaps force coaches and clubs to concentrate on quality play improvement rather than match scores and tournament trophies.

Speaking of footing the bill, the cost of the service becomes a possible limiting factor. If average families and smaller clubs can’t afford the product that Darkhorse is going to promote, it’s ability to affect the quality of American soccer would be limited. Darkhorse is understandably reluctant to advertise a concrete price at this time, but they assure observers that their service will be surprisingly affordable to anyone who wants it once they are ready to market their “Youth Soccer Operating System”.

So, how about our original question : “will this technology drive the art out of the youth game in the USA?”. The fact is that nobody in the soccer world raves about any American mastery of any segment of the game. We are still considered a developing country in soccer circles and the failure of our youth to progress beyond basic game abilities, both physical and mental, is a major factor in that slow development. If the Darkhorse Youth Soccer Operating System is a step toward improving the skills of American youth, this observer believes the art of the game will improve right along with it.