USA – Panama: Man of the Match

Last night the USA national mens team scored a convincing 2-0 win over Panama. Now in world soccer circles, nobody is confusing Panama with Spain or Germany or even England…….or even Montenegro , for that matter. (Hey, Montenegro is leading its qualifying group!) But Panama has given the USA trouble in the past and were undefeated in the group going into last nights match. It was a loss to Panama that started the USSF questioning Bob Bradley as coach and those doubts eventually cost him his job. OK…. a 4-2 loss to Mexico after leading the match also helped, but the loss to the unfancied team in red started the ball rolling.

So, the US did its best to produce a favorable climate for the home match, including scheduling it in Seattle where the Sounders have a large and vocal following and then cutting the new grass on the morning of the match to make the field faster. But the best thing the USA did was play a great match. For the first time in the Klinsmann era, and perhaps for the first time ever, the USA looked like a team that could be called a world power. (ok, I know that’s a bit much, but I still have afterglow from last night!) For that, and for taking the two forced changes to the lineup and actually improving the team with those changes, the Soccer Yoda names Jurgen Klinsmann as the Man of the Match.

Now, this is a notable honor for Klinsmann. Lets face it, when the most commentary a coach gets is about his wardrobe, something is missing.

What was missing was a USA match in which Klinsmann’s influence as a world class player and coach was easily apparent. A match in which our national team looked like a team which is aspiring to greatness, one which can play with world class smoothness, pace and ,perhaps most of all, confidence.

Last night was it. The possession, interplay, passing , defense, they were all impressive and for the most part, consistent throughout the match. Against Jamaica, there were times when this type of play was there, particularly in the first half when several attacks came close and Altidore scored off of a well produced Zusi cross. But that night the USA couldn’t maintain the play. They lost the possession game, started hitting meaningless long balls, eventually lost their concentration and the lead. Jurgen pleaded with them from the sideline to keep the ball and make Jamaica chase, thus consuming time and Jamaican energy. But it didn’t happen.

Against Panama, not only did the composure of the team remain a constant, but the attacks were quick and insightful. Although Mohammed Ali first said, “float like a butterfly, sting like a bee” , that strategy holds very true in soccer. A slow possession game, even when well done, that remains slow, results in lots of ball possession, lots of field position, and lots of frustration around the opponents goal. And frequently gives up a counter attack that results in an opposition score. Strikes must have pace, must turn and unbalance defenses and must feature great execution. (More about this stuff in future posts). Last night the US displayed that type of attack. I attribute that to Klinsmann.

But the best play that Klinsmann orchestrated against Panama was inserting Cameron for Jones and Johnson for Zusi. Much had been said about the effect that losing those two would have on the team. Jones had been providing excellent defense in front of an inexperienced back four, helping them greatly. Zusi served Altidore the first goal against Jamaica and was proving to be source of good balls troubling opponent defenses. BUT, Jones was not consistently participating in the offensive buildup and Zusi was not a great threat to score himself. Klinsmann took two players from different positions. Cameron came from the back line and Johnson from the top. (He was Altidore’s sub against Jamaica). What he got was an improvement on the originals! Cameron not only played defense but contributed to the ball- holding offense and Johnson proved to be a real thorn in Panama’s left side. Johnson beat the Panamanians with his pace, with his dribbling, with his quickness. And then the two newcomers combined on an over- the- top strike that required vision and skill on Cameron’s part and a combination of those attributes of pace and technique from Johnson. The result was a fine, game-clinching goal and Klinsmann looked like a genius.

The game against Panama was LARGE step toward World Cup qualification and perhaps the first view of the dominant, cool, skillful USA team that we all would like to think has been hiding in those ever-changing uniforms somewhere ( I wish Nike would  settle on just ONE USA look) , just waiting for the right coach to pull it out. Right now , it looks like Coach Klinsmann could be that coach. After all, last night the only wardrobe talk was about the undressing the USA gave Panama. (Sorry, I couldn’t resist.) 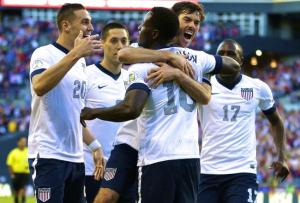