← USA Is Quietly Building a Powerhouse
Art, Science, Technology and Our Developing Players →

USS Federation and Its Freakish Failure For Females

For decades women in this country have fought for equal pay when they perform equal work compared to men. They have met with varying degrees of success, but it is well known that there are many businesses and industries in which women still do not garner the same compensation as their male counterparts. Overall soccer is one of those industries in which inequality still exists in many of it’s areas.

One of the most visible examples of that bias is the pay given to the US Women’s National Team in comparison to the men by the United States Soccer Federation (USSF). One example is World Cup compensation. When the USA women won the cup last year (which they have done 4 times including the last two competitions) they earned $200,000 each, not bad, but the men got $179,375 each just for playing in the regional qualifying tournament in 2018. They would have earned a mountain much more if they had won the whole championship. Of course, qualifying for the tournament is a necessary step in that direction, something the men failed to do.

After trying futilely to convince the USSF that they deserve equal pay, the US Women’s National Team (WNT) finally sued the national organization for their overdue compensation, claiming gender discrimination. They want $67 million in damages. And last week the lawyers for each group filed their initial documents, with the hearing scheduled in May. To put it in soccer terms, at this point the USSF is definitely not on the front foot. As a matter of fact, one of their top people has been red carded already.

The USSF hired a firm to defend the suit and then apparently paid no attention to the arguments those lawyers decided to use. The USSF attorneys knew they couldn’t argue that gender discrimination was ok, so they decided to push the idea that the women don’t work equally hard and therefore are not due equal pay. But their arguments have more holes than goal nets.

The USSF attorneys claim that men work harder because they are “bigger,stronger, faster”. Of course, forgetting for a minute that ALL men are not necessarily “bigger,stronger, faster” than ALL women, somehow the USSF wants to link physical attributes to work rate. Aside from the general weakness in that argument, there is also the issue of amount of work relating to frequency of work. The men play for club teams and only “work” for the USSF during designated international weeks and tournaments. Without a doubt, playing for the national team for men is secondary to club appearances. The women, however, while they do play for clubs, have many more national team matches, and more appearances in general than the men. How come?

It’s a combination of factors that result in the large number of Women’s National Team (WNT) appearances. The club games  definitely draw fewer fans than men’s games do. However, in the USA the WNT typically draws as well as the Men’s National Team (MNT) and often they pull in crowds that would make the men enviable. A major part of the USSF argument seems to be incredulously based on the failure of the men to produce wins. For example, they claim  that the men work harder because they face so much hostility during home games. But, that depends upon venue and recent results. The USSF has purposely played in locations where it knew that the number of attendees would contain a heavy number of fans rooting for the away team. Why? Because those fans pay to get into the stadium. The USSF earns more money for all that “hard work”; that ” hostile environment”. Why not play in more friendly stadiums? Because the men don’t draw as well with home fans when they aren’t winning. Attendance at the men’s matches has dropped drastically since the team failed to make the 2018 World Cup and since the squad changed in its composition. The women have more matches, more home fan support, more TV exposure because they deliver results. Somehow, the USSF figures that, therefore , they work less hard than the men. Of course, all that exposure increases player recognition. While many US soccer fans and even American sports fans in general know about Carli Lloyd, Megan Rapinoe and Julie Ertz due to their World Cup play, how many are familiar with Gyasi Zardes, Wes McKennie or even the most well known of the men – Christian Pulisic? Winning and World Cups makes the Federation money. And yet, the USSF argues that the men work harder and should be paid more, because they haven’t produced on the field.

Admittedly the world soccer organization FIFA earns far more from the men than the women. And pays more to member nations for their men’s teams participation in events. However, FIFA is earning more from the women every year and that has come from the increased interest and commitment around the world for the women’s game. And that can largely be attributed to the American women. Even FIFA President Gianni Infantino referred to the greater incomes coming from the women when he mentioned that FIFA would look at expanding the Women’s World Cup and increasing the associated financial rewards: “We don’t need all this money in Swiss banks.”

It should have come as no surprise to the USSF that the arguments presented by their attorneys did not exactly draw praise once the papers were filed. Actually, it appears that the federation was indeed pretty surprised, just as the rest of us were, by the sheer bias and convoluted logic that passed for their position. As a matter of fact, a number of USSF sponsors quickly announced that they did not agree with their associated federation on these points. Deloitte told one news company that they were “deeply offended by the views expressed by the USSF”. Other, larger sponsors such as Budweiser and Visa demanded meetings with the groups lawyers. They are not happy with the USSF at all. And Coke blasted the organization,” The Coca-Cola Company is firm in its commitment to gender equality, fairness and women’s empowerment in the United States and around the world and we expect the same from our partners.”

In response to all the criticism, USSF President Carlos Cordeiro issued this statement,” On behalf of U.S. Soccer, I sincerely apologize for the offense and pain caused by the language in this week’s court filing, which did not reflect the values of our Federation or our tremendous admiration of our Women’s national team.” The organization hired a different law firm to continue it’s defense of it’s position. But It is notable that, at this time, the USSF has not changed that position, just retooled the way its going to defend the suit.

For Cordeiro, his apology came too late. Without a doubt, he came under pressure to do more than merely apologize and the day after issuing the apology he resigned. How do we know that he was under the gun to give up his position? Well, remember that the USSF was now faced with trying to convince the American public that it isn’t totally anti-female. And the higher-ups in the federation knew that, should the President resign, the Vice President would take over the office of President. So he did and the new President is Cindy Parlow Cone, not only a women, but a member of the most revered bunch of female soccer players in the history of the game – the “99ers” – the group of women who astounded the sporting world by selling out the largest stadiums while winning World Cups and Olympic championships and inspiring a new generation of American soccer players of all types and genders. 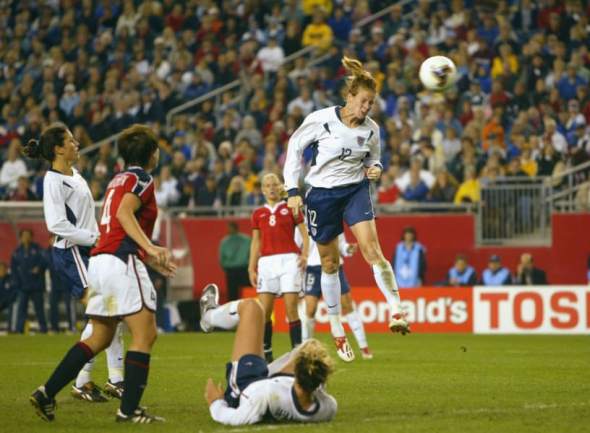 Will Cone be able to repair the image of the USSF? She has a mountain of work to do, and not just in reputation. U.S. Soccer is a mess right now in numerous areas. But having a women at the top at this moment is a step in the right direction, it will be very interesting to see what she can do.